Back in the days of silent film, the only information a fan could get about a star was from magazines. Of course, the only information the magazine writers had was what they were told by the star’s PR team or the studio’s marketing team. In many cases, fans and writers alike didn’t know how old the stars were, just that, in most cases, they were “under 30.” While some stars were very open about their backgrounds, others garnered attention from the elaborate backstories concocted for them by the studio publicity and marketing teams. The best and most fascinating instance of this is the story that surrounded silent film star Theda Bara.

Though not the first, Theda Bara is perhaps the most famous of the silent film vamps. She had a prolific career in the mid and late 1910s and was at the height of her fame during this time. She gained a devoted following very quickly and became one of the first cinema sex symbols. Yes, she was beautiful. Yes, she was talented. But much of Theda’s initial success grew out of  a clever PR ploy by Fox Film Corporation that turned her into an other-worldly being. To her fans and the press, Theda was the lovechild of Theda DeCoppet, a French actress, and Giuseppe Bara, an Italian sculptor and painter. She was born in the shadow of the Sphinx, raised in the Sahara and studied the occult. For her introduction to the press, Fox staged an elaborate press conference with Theda in a hot hotel room where she was surrounded by exotic artifacts that were supposed to approximate her “home.” Even her name, some pointed out, was an anagram of ‘Arab death.’ And the press and the public were fascinated by her. It’s a story that likely is followed by many modern integrated marketing examples, though thanks to social media the public usually catches on a little faster.

Playing off of this fabricated past, she and William Fox — head of Fox Film Corporation, which later became 20th Century Fox — embraced roles like Salome, Cleopatra and The Vampire in her first starring film, “A Fool There Was.” These women were exotic, power hungry and often ruthless — far from the person Theda actually was. In reality, Theda was Theodosia Goodman, the daughter of wigmaker Pauline Goodman and tailor Bernard Goodman. Although her parents boasted a European background, Theda was born and grew up in Cincinnati, Ohio, far from the shadow of the Sphinx. Although rumors of Theda’s true identity had been around since her debut, in a 1920 issue of Photoplay Magazine, Theda finally “confessed” about her true origins. She admitted that the stories of her origin were works of fiction created by the Fox publicity department, and joked that she suspected her elaborate backstory required a team of writers who would work through the night. 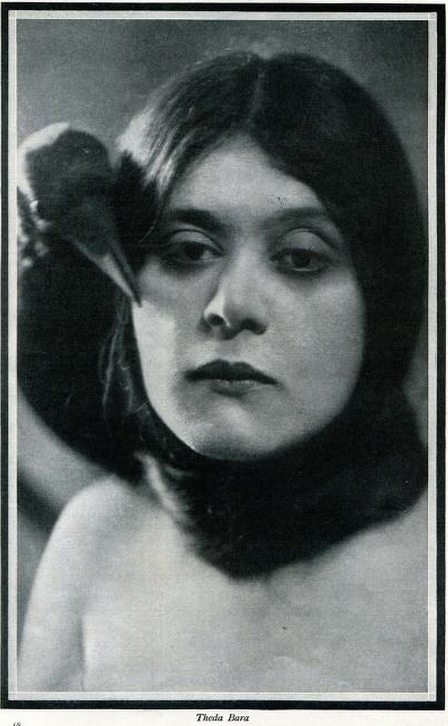 Only a handful of her films survive, as most were destroyed in a fire in that late ‘30s. She remains something of a mystery to modern silent film fans, yet, her legacy and fascinating, albeit fabricated, persona live on.

The publicity stunts created for Theda by the Fox Film Corporation are among the first ever such stunts created by Hollywood. What are some other false personas or pasts that have been fabricated by the the Hollywood PR machine that you know of? Are you enjoying our look back at silent film?

Want to dive deeper into the world of silent film? Keep up with my posts over on Curtains or on Chicago Nitrate. You can also jump to the modern age of very un-silent films with our list of best Bluetooth earbuds.