New research from Twitter and Compete reminds us that mobile-social networkers represent a sweet spot in brand marketing. Not only are mobile Twitter users more active than their desktop counterparts, they are more likely to engage with brands and recall seeing Twitter ads.

At least 60% of Twitter’s 200 million active users log in via a mobile device at least once a month. They are also more frequent users of the platform. In fact, mobile users are 86% more likely to be on Twitter several times a day than the average Twitter user. 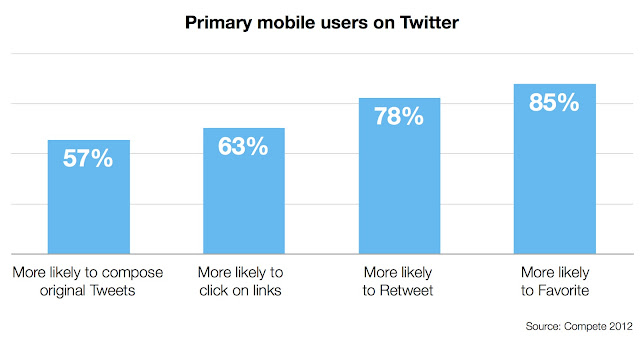 Perhaps the best news of all is that mobile users are interested in what brands have to say on Twitter. While the average Twitter user follows five or more brands, users who primarily access Twitter on mobile are 96% more likely to follow 11 or more brands. Ads also seem to be more effective among the mobile bunch; they are 58% more likely to recall seeing an ad on Twitter than the average Twitter user.

Those numbers pale in comparison to Instagram and Snapchat when it comes to engagement and daily use, but they are significant nonetheless. That may have to do with the fact that Instagram influencers are making more money than ever before, promoting faster adoption and an image of cool. It’s also worth noting that among niche social media influencer groups like sports and financial services, Twitter may provide more activation.

This mobile-social audience is ready to consume and share brand content. It’s up to us as marketers to give them the content they crave, and up to users to get more followers!